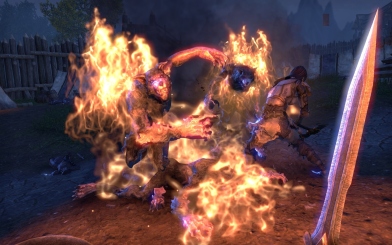 I finally arrive at the outskirts of Camlorn in the early hours of the morning.  The Lions guard offensive has faltered.  Faolchu’s beasts have managed to drive the guard from their own siege camp, thus splitting the Covenant forces in two.  I, along with a female Orc by the name of Shaza gra-Dasik, have been charged with leading the attempt to retake the camp.

I have battled all manner of mer, beast, and daedra since first taking up the sword, yet none that I fought can match the brutal savagery of the werewolf.  They fight wild and uninhibited, displaying a voracious lust for blood and violence that neither knows nor cares who or what its next victim is.

Yet this Orc female fights with such a cerebral ferocity that even the savage monsters we face seem unnerved by her.  She is measured yet unmerciful, deliberate yet rampant.  She embraces rage and lets fly restraint, yet maintains reason throughout.

After losing another argument to my mother, my father once jested that neither Nirn nor Oblivion could produce a creature as cold-blooded as an angry woman… he should count himself lucky he never married an Orc.