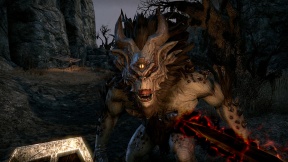 The forsaken Breton burial grounds of Sanguine Barrows have long been overrun by troll and skeever, yet somewhere within these tombs and caverns hides a war criminal who must be brought to justice.

During King Ranser’s war, soon after Emeric had signed his alliance with the Wrothgar Orcs, Ranser’s head of security Gerard Althen, ordered the detainment and slaughter of hundreds of Orc civilians living within Rivenspire’s borders.

It speaks much of the delicacy of diplomatic relations within High Rock that a decade since the end of the conflict and Emeric will neither send his own Lion Guard into Rivenspire nor rely upon the loyalty of the Shornhelm authorities to bring this man to justice.  Instead he contracted a mercenary group, the Rings of Daggers, and they in turn hired me.

For his part Gerard Althen insists that he was only obeying his King’s orders, and that he has spent the last 10 years trying to make amends to the Orc people for his part in the atrocity.  I have not the wisdom or will to hold this man’s ledger to account and adjudicate whether his moral credits outweigh his debt.  I am just here to complete a job and deliver him to others so they might judge his moral crimes and restitutions.

… And I am fully aware that in this one regard, I am no better than he… just following my orders.