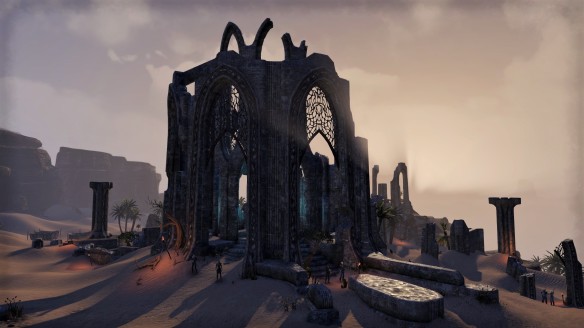 The ruins at Salas En on the Hammerfell coast are believed to have been an Ayleid stronghold built during the Merethic Era.  The Breton archaeologist Lady Clarisse Laurent, leads an expedition to learn more about the original inhabitants of which little is now known.

Since the Ayleids were overthrown, Corelanya Elves and Yath Yokuda have both attempted to build on the site, but neither of their settlements managed to endure the attrition of the desert winds as well as the original Ayleid structures.

An active portal was discovered deep in the ruins which upon investigation was found to lead to the jungles of Grahtwood.  Unfortunately, the investigator returned from the Valenwood with the Dominion army hot on his tail.

Now the Aldmeri seem to be preparing for a full-scale invasion on the Alik’r.  We must quickly find a way to close the portal before the Elves retake the ruins they last held some 2600 years ago.