I vaguely recall on my first visit to the Rosy Lion tavern in Daggerfall a Breton minstrel singing the tale of how a great Dwemer chieftain of Morrowind threw his mighty warhammer far, far into the sky and declared that wherever it would fall, there he would settle his clan. Thus the intrepid chieftain led his tribe across the swamps of Morrowind, through the forests of Cyrodiil, and into the southern deserts of Hammerfell, to establish Volenfell, the City of the Hammer.

Despite the harsh desert environment the city grew swiftly and soon became a beacon of Dwemer industry, until that is the sudden disappearance of the Dwarven people, and the city was lost to the sands as quickly as it had risen.

Now however the fabled city has been rediscovered by modern day treasure hunters like the Redguard Tharayya, whose journey I have followed from one end of the desert to the other. Although a rival band led by her estranged husband appears to have made it here first, whilst the notorious Seventh Legion of the now corrupted Empire are not so very far behind.

What the treasure hunters found when they first entered the city though was not the empty carcass they might have expected, but a city full of eyes, all watching them. 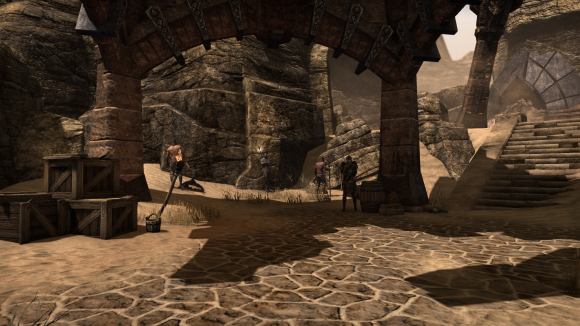 Numerous prides of lions watch from beneath the rock walls where they shelter from the burning midday sun, giant assassination beetles watch as they scuttle from rock to rock, huge dunerippers watch from their shallow burrows beneath the sands as they impatiently await to ambush their next meal, and behind every door and every wall watch the heritance of the Dwemer, the automations, working fastidiously to keep their crumbling city breathing still. 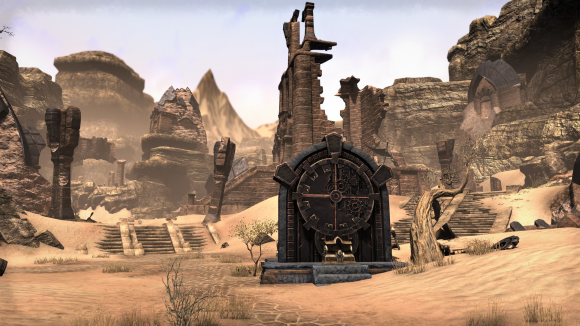 But I can’t shake the feeling that the city of Volenfell is itself also watching through the many eyes of the Dwemer faces carved into the façades of every broken building, searching the distant horizon for the return of it’s masters, much like the widow of Northsalt who stares forlornly into the ocean for the lost sail-boat that can never return home.