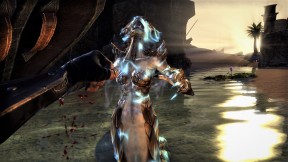 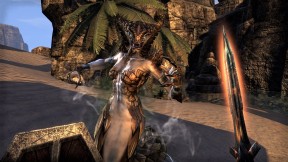 Hiding amongst the rocks of the wild Hammerfell coastline, the ever hostile Lamia can prove too much of a challenge for even well-armoured adventurers.  Whilst these serpentine beasts are mostly water-dwelling, they will often come ashore to prey upon unwitting men and mer.  Carnivorous and avaricious, they waste not a morsel of their victims, making feast upon flesh, organ, and bone.

With the appearance of a serpent in head and muscled tail, their torso inexplicitly resembles that of a woman; including breasts which surely have little purpose for a reptilian.  It is suggested by some however that their female form is but illusive, and together with their sweet, soporific song, is but a lure to males of all species, coaxing them towards the shallows and into their clutch.

Indeed, the Lamia are reputed to be a semi-intelligent species, even capable of speaking Tamrielic with their forked tongues.  Certainly they are capable of the language of magic, which they utilize effectively in combat, together with cacophonous shrieking that can debilitate and disorientate, and powerful claws that can shred leather and bone.