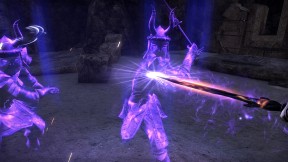 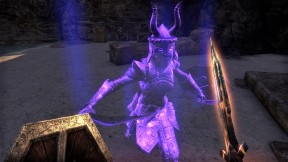 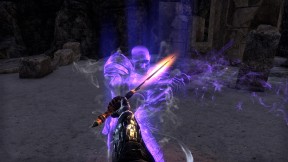 At a Yokudan ruins on the beaches of the Alik’r, where in the first era the Ra Gada made landing in their invasion of mainland Hammerfell, an Imperial scholar searches for the weapon of the legendary Sword-Singer Navid.  Scholars travel the length and breadth of the land collecting relics of Tamrielic history that they display like works of art to be savoured by only the few in private collections, but this cursed relic would not sit safely in some wooden cabinet in a Colovian manor, and is perhaps better lost to antiquity.

Sword-singers were an order of Yokudan blade-masters who, it is claimed, became so dedicated to their martial philosophy that they could manifest a sword in their hand by sheer force of his or her will.  This sounds fanciful, although it is accepted that they were masters at tempering the blades they forged with powerful magics.

However Navid’s blade was initially formed it is clear that the weapon he left behind became tainted by the invidious and injurious fate of its creator.  In an impetuous act birthed of jealousy and spite, Navid slew his good friend and life-long ally Ihlqub over his love of the beautiful Sayeedeh.  When Sayeedah heard the news she took her own life, and Navid drowned in his guilt.

Yet after his death, others sought to claim his prized weapon, only to fall victim to the ethereal blade of Ihlqub himself.  Now they are cursed to covert the weapon from beyond the veil, and they will never stop chasing it, for they cannot be killed, only put to rest again, and again.

Even the ghost of Nevid now fears his own blade, and when even the dead are afraid, then you know you have a problem.