As any who have crossed the Alik’r wastes will tell you, nowhere abandoned in this desert remains forsaken forever. In Volenfell It has been centuries since the Dwemer’s sudden disappearance and in that time many different desert creatures have made the ruins of this once great city their home. But amongst them, there are a few extraordinary creatures that in this isolated ecosystem have grown to monstrous size. 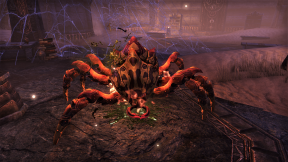 One such creature is a huge Shalk I found living within a large hall my guide called the ‘Guardian’s Helm’. The hall houses a lever that operates the city’s inner defensive gates, which we will need to open if we are to delve deeper into these ruins.

Shalks are native creatures to the volcanic areas of Morrowind where the Ashland tribes reportedly herd them like guar. So just how did this massive Shalk came to be so far from its natural habitat?

Perhaps the Dwemer Rourken clan bought a herd of Shalks with them when they first came east across the provinces of Morrowind, and Cyrodill to make their home in the desert. Could it be that this giant is the last remaining kin of the original Rourken herd, or perhaps it is a descendent of creatures bought here centuries ago for the very purpose of protecting the doorway mechanisms to the inner city. 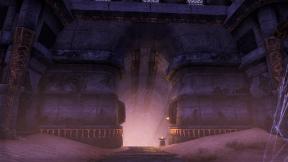 It is all supposition now best left to the scholars, for I am far too preoccupied trying to avoid its frightful pincers and pernicious bouts of spontaneous combustion.

Once beyond these halls and further into the city I witness a disturbance in the dunes up ahead. When I go to investigate a huge Duneripper bursts from beneath the sands and attacks.

Even a regular sized Duneripper can prove to be a formidable threat, heavily armoured with thick plating from nose to tail, even their necks, usually a point of vulnerability on any armoured opponent, are protected by long sharp spines. This behemoth’s movements are as slow and stiff as you might expect from such a massive reptile, but without due care one might quickly find oneself cornered against the rock face with nowhere left to hide or run. 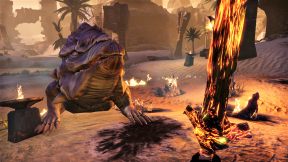 The beast has terrifyingly long sharp claws like blades on every foot, a thickly muscled tail which it swings like a heavy mace, and massive jaws with teeth like daggers. An unprotected underbelly appears to be the creatures only weakness and the obvious target for any warrior’s blades, whilst for the spell-caster and the archer, the aim must be to keep a constant distance at all times. 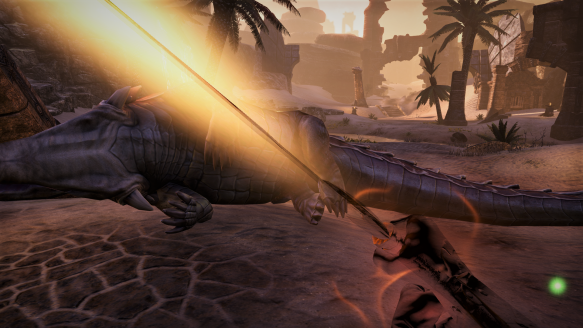 Just remember, never let your back hit the canyon wall.