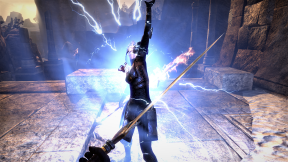 The temple of the Hall of Heroes is the final resting place of many fabled Redguard gallants of yesteryear, and now it is to be the graveyard of the Seventh Legion’s ambitious Hammerfell incursion; or so it is expected. Indeed, so confident that this is indeed the Magus-General Septima Tharn’s last stand, that High King Emeric himself has rushed here to lead the final charge to drive the Imperials from the Bangkorai sands. No doubt he has one eye on the history books, but alas like all vain men he may have suffered a moment of unreasonable confidence.

The scouts warn us that the Seventh Legion have been here for several weeks and are now well dug in, and some have even reported they may have spotted daedra within the temple itself. Why here? Why at this ancient crypt? Why does this feels so much like a trap?

Throughout Her northern campaign Septima Tharn has proved herself a masterful and cunning tactician. Capturing the indomitable Bangkorai Garrison, and almost sweeping the entire region with but a single legion. We may have the numbers and the fresher troop, but we cannot underestimate Tharn’s artifice, for whilst a dagger might not be as large and destructive as a greatsword, in the hands of a skilled nightblade its edge cuts thrice as deep.

There was a saying back in the Imperial city, ‘The only thing sharper then an assassins blade is a Tharn’s tongue’.

One moment we stand ready to storm the temple, the next by Septima Tharn’s foul magics, the King’s entire retinue lays dead about and Emeric himself is made prisoner. And yet, whether for arrogance, sheer temerity, or a brilliant gambit I cannot yet see, she left one standing… me.

On such moments of unreasonable confidence do entire kingdoms stand or fall.