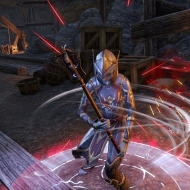 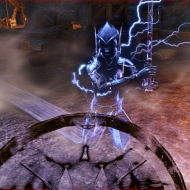 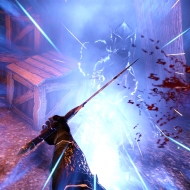 Deep in the caverns of the once abandoned Koeglin mines, a mysterious Dark Elf named Girara oversees a band of Ember-eye bandits who are pressing their captives to dig, delve and shovel.

These excavations were only recently re-opened on behalf of the Wayrest Mages guild to extract rare crystals needed for making soul-gems; the venture was to be an abject failure.  In hindsight it would have been better for the unfortunate locals if upon their withdraw, the miners had collapsed the mine behind them… nothing abandoned in Tamriel remains forsaken for very long.

It is unclear whether there is a connection between this Dunmar ‘Girara’, and ‘Giara’, a mage who was sent to oversee the failed enterprise.  Certainly the Dark Elf proved very adept at casting elemental magic to augment her skill at wielding a mace.  Alas that the sharpness of my blade means that it may forever remain a question unanswered.