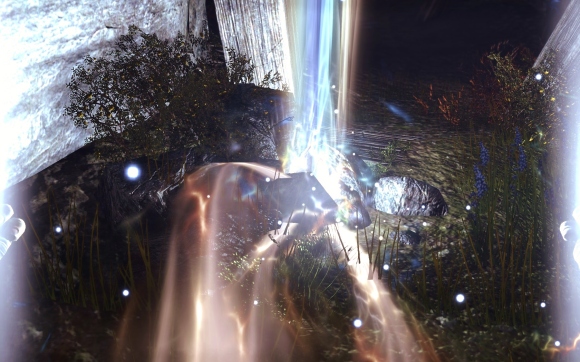 As I venture deeper into the dark arteries of the mine I espy the unmistakable ethereal glow of a skyshard illuminating in the thick dust-filled air.  It is not uncommon to find skyshards hidden deep beneath the ground; one can only speculate as to why.

Perhaps it is as the scholars suggest that the Ayleids had found a way to manipulate the mystical properties of the shards for their own purposes.  Or maybe it is as the priests would have us believe, that the shards are being actively sought and hidden away by cultists in a plot by certain Daedric princes to keep mortals from discovering something of the mysteries of creation.  Or perchance it is as the philosophers would have it, that it is simply in a mortals nature that when a star falls from the sky, we feel the overwhelming desire to shield its beauty from the world about, less others might despoil it somehow.

One wonders if the people who hid this one away even knew what they had found, or any idea of what to do with it.  Certainly the bandits in this mine seem far more intent on mining for crystals then appreciating the infinitely more valuable shard that sits gently vibrating so close behind them.

Back in the prison on Coldharbour, the old man told me that skyshards carried within them the very essence of Nirn.  All I can say for certain is that when I connect with one, I am filled with such a surge, that my very blood tingles in my veins, and briefly… just briefly, that fathomless emptiness deep inside where my soul should nest, overflows with warmth and vitality.