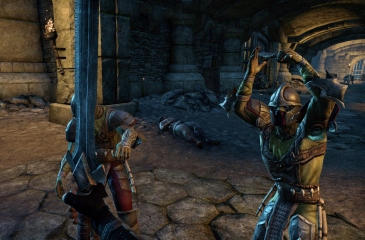 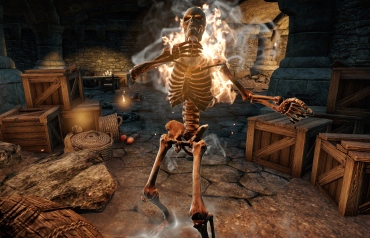 A goblin tribe has infested the catacombs beneath Pariah Abbey, setting up camps inside and outside of the tomb.  Members of the Spirit Warden order have been sent to investigate, but thus far none have returned.  Once these were the principle burial grounds for Stormhaven’s nobility, now just another of High Rocks derelict mausoleums slowly eroding away into forgotten yore.

I enter the catacombs half of the opinion that perhaps we should just leave the green skins to their pit; let them rot down here with the rats and crawlers.  But soon I find evidence that there is something far, far worse than mere goblin and durzog prowling beneath this Abbey.

In the nethermost chamber I spy it, the animated bones of a dead being.  Taller than an Altmer, perhaps even broader then an Orc; it was difficult to fully gage its size as it was stooped over the remains of numerous goblin dead.  I began to creep closer but soon I was stopped dead in my tracks by an unexpected sight which filled me with equal measure of revile and horror.  The skeleton was feasting upon the flesh of the dead!

Even the most odious realms of Oblivion has yet to spawn such an abomination as this.  There is no nourishment to reap for the skeleton, no digestion, no hunger to sate, even the zombie feeds for sustenance.  This thing was feeding upon mortal flesh for desecration sake.

I charge and take the abomination unaware, but swiftly it becomes apparent that thrust and parry cannot win this fight.  Even a clean strike from my Orichalc-wrought blade could not so much as make a knick in the skeleton’s ribs.  But sword and shield are not my only weapons.  I began training in the traditions of the Dragonguard when I first entered the Legion.  I believe with much discipline endued, I now wield Draconic flames with such art that might shame a flame atronach, or rouse envy from a Dunmar pyromancer.

Nothing of Nirn is infrangible, it is the first principle of a mortal realm, all that is kindled will eventually burn to ash.