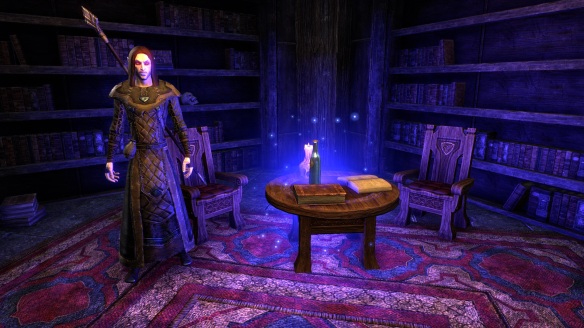 As I come to terms with the revelation that my new allies at Castle Ravenwatch are vampires, I realise how little I know of them beyond camp fire stories and old wives tales.

I remember one such tale of how a vampire was created by a stray cat jumping over a corpse, and another of how a window left open in a room in which lay a recently deceased body allowed a mischievous black crow from the Reach to fly in and by its harsh caw, mislead the lost soul back to its former body.  Yet another told of how a vampire victim became so enthralled that even beyond death’s ethereal doors he was unable to resist the vampires pull and returned to his corpse to become vampire himself.

My only experience of vampires came when serving in the Imperial Legions back in Cyrodiil.  A fellow soldier travelling back to the Imperial City after a period of leave, stopped off to spend the night at a small village tavern.  As he sat down for evening meal with the landlord and a few local patrons a bedraggled old woman entered the tavern and sat with them at the end of the table, and just stared in silence at the landlord.  The landlord and the locals looked startled and horrified, and the soldier knew not what to make of the scene.

When the soldier rose the next morning he learned that the landlord had died in the night.  Upon enquiry as to the bedraggled woman he was told she was the landlord’s mother who had died and been buried two days prior.

Upon returning to barracks the soldier recounted his curious tale to his comrades and eventually it reached the attention of his superiors.  An officer was commissioned to investigate the facts of the story at the village.  The officer, a priest of Arkay, a member of the mages guild, and the soldier, came to the village and were met with a most gruesome scene.  The entire village was dead, their bodies left strewn all about.

The Priest examining the corpses was shocked to find many of them of ruddy complexion, as if blood still flowed through their limbs and they showed little sign of the rigidity of death, as if each had been dead but less than an hour.

Suddenly the soldier, who had stood silently by throughout, attacked the priest, appearing to attempt to bite him.  At the same moment a corpse rose and attacked the officer.  Only the mage was able to escape.

Upon his return to the Imperial city the mage sought an immediate audience with the emperor, who upon hearing his horrific tale, ordered an entire unit of the legion, my unit, to return with the mage to destroy the village and all in it.

When we arrived however we found the village utterly deserted, not a single person, nor a single corpse could be found.  No birds flew in the sky, no beasts roamed the fields, and the flowers and grass all about had begun to wither and wilt; it was as if nature itself had forsaken the village.

We could do no more than raze it to the ground.